The AECEO's Kindergarten Conversations began in 2020 after the Kindergarten Summit, the conversations were envisioned as a way for Kindergarten educators to come together and share their experiences. As the pandemic took hold and prompted changes in the ways that the program was delivered these conversations and connections became even more timely and important.

These Conversations were a chance for the AECEO and participants to think collectively about what distinct advocacy for kindergarten ECEs should look like. We took the opportunity to prompt, listen, and reflect on the experiences, hopes and ideas of kindergarten educators, and then to collaboratively organize, strategize, and plan advocacy actions.

During the first few Kindergarten Conversations we looked deeply at what is currently happening in the kindergarten programs and at the lived experiences of educators. What we heard during those conversations we have summarized into three broad categories:

We also asked and heard about challenges that emerged or increased due to the Covid 19 pandemic, these included but were not limited to:

As the Conversations progressed and we gathered an understanding of the challenges kindergarten educators are facing we began to discuss what opportunities exist in the kindergarten program and what possibilities advocacy might bring to fruition including:

This work to identify what educators need to have in place to feel recognized and respected allowed us to work together to develop advocacy tools, both for individual educators and to create greater focus in the advocacy work of the AECEO on behalf of kindergarten educators.

In planning the advocacy tools that we have created, we understood that many of the challenges that kindergarten educators face stem from a lack of clear understanding of the role of the ECE in the program. Together we intend to address this lack of understanding from various stakeholders, starting with those most immediate to the ECEs: their colleagues, school administrators, and the families of children in the program. We sought to create tools that individuals can use to advocate from themselves directly, as a first step. The AECEO understands that advocacy must address all stakeholders, including Unions, school boards, and the Ministry of Education, and our next steps together will continue to create tools and advocate collectively for educators in all of these spaces.

Document: The Role of the ECE

The intent of this document is to draw together information from a variety of sources that speaks specifically to the role of the Early Childhood Educator in the kindergarten program, so that ECEs may have in hand the means to advocate for recognition of their roles as defined by the Education Act, the Kindergarten Act and other sources. The document also gives examples of issues that educators may face and highlights the acts and information that may best speak to those issues. 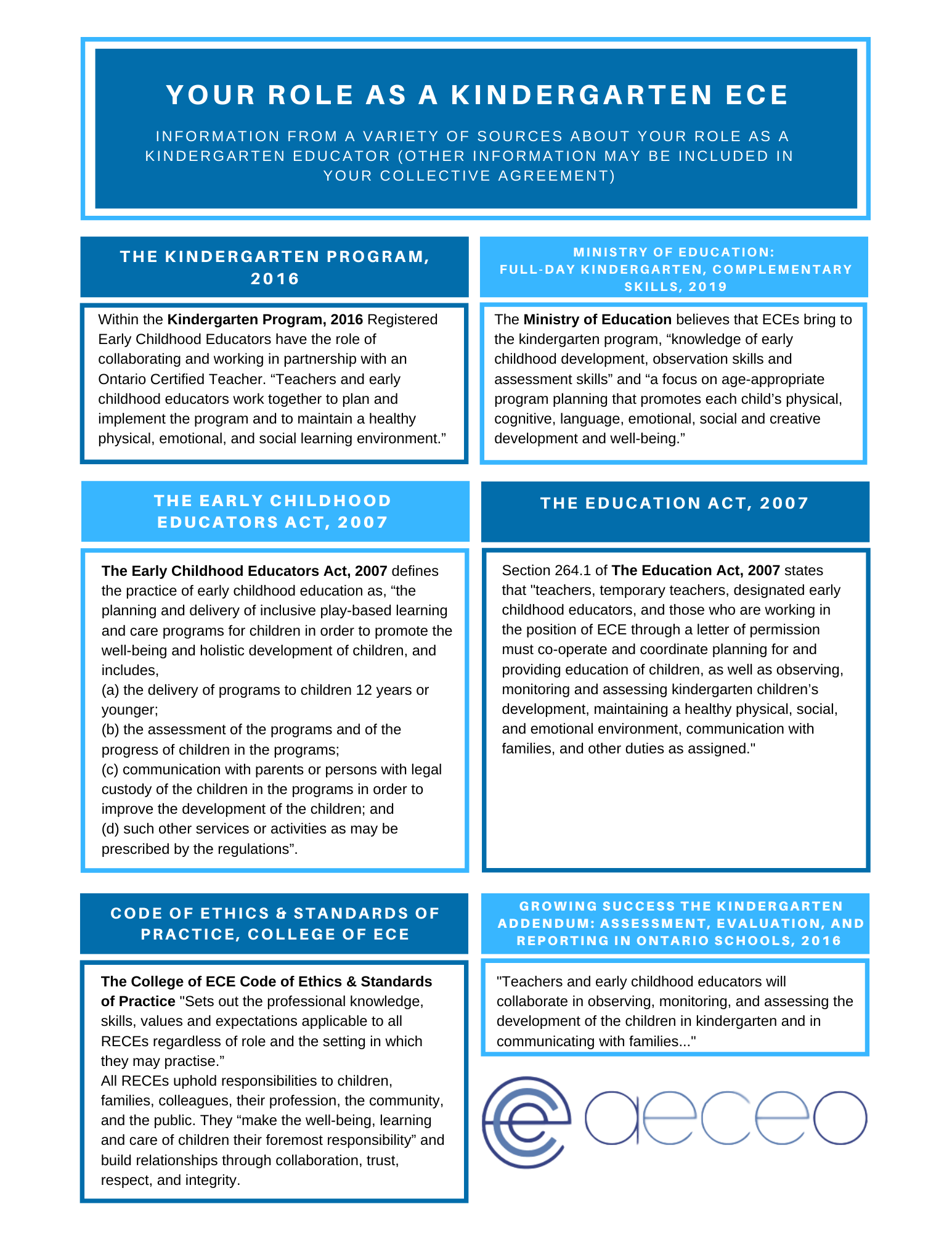 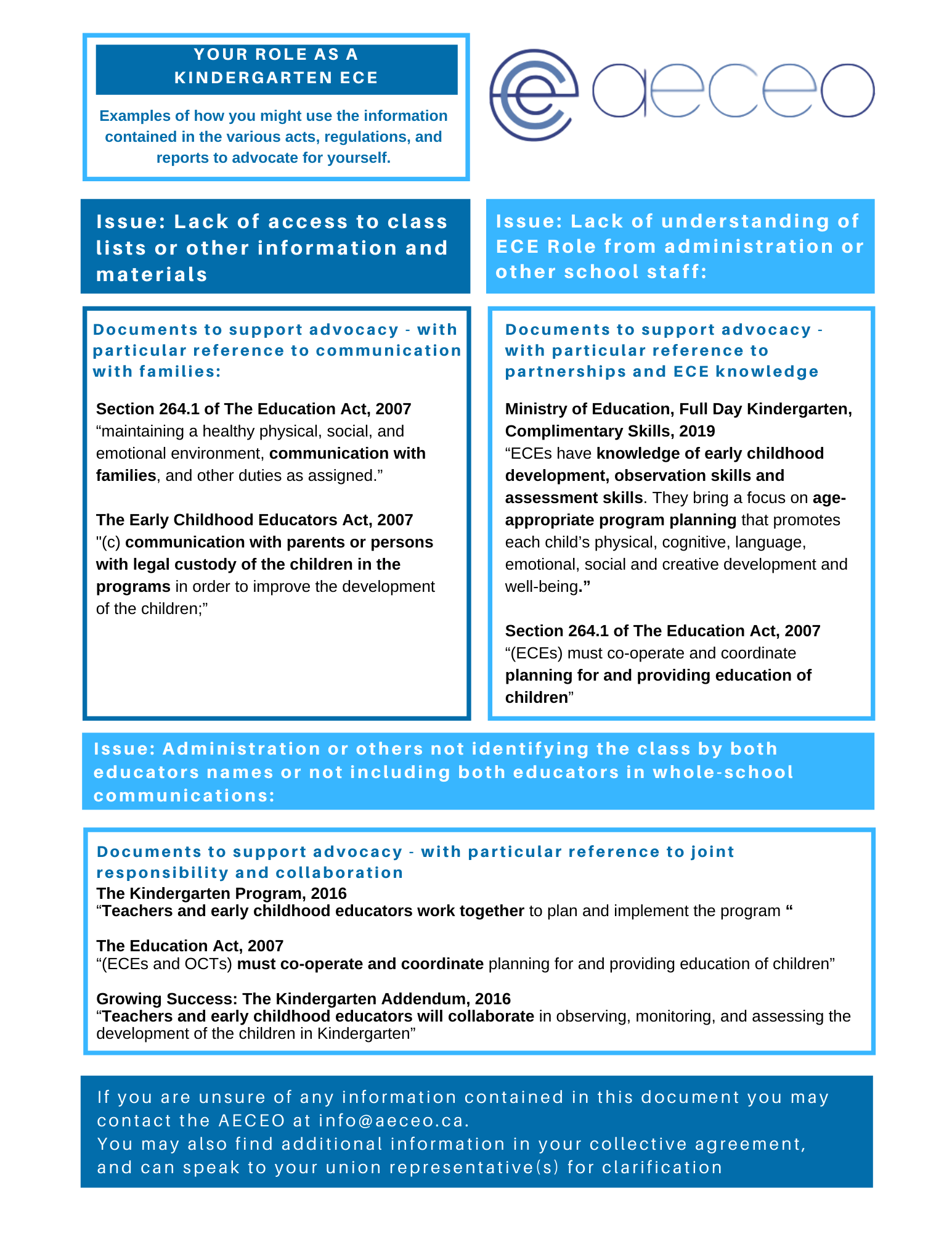 This checklist is a guide for administrators to valuing and supporting RECEs as members of the kindergarten educator team. It is intended to be used by Kindergarten educators to advocate for themselves with in-school administration personnel, and can be used in conjunction with the Role of the ECE document. 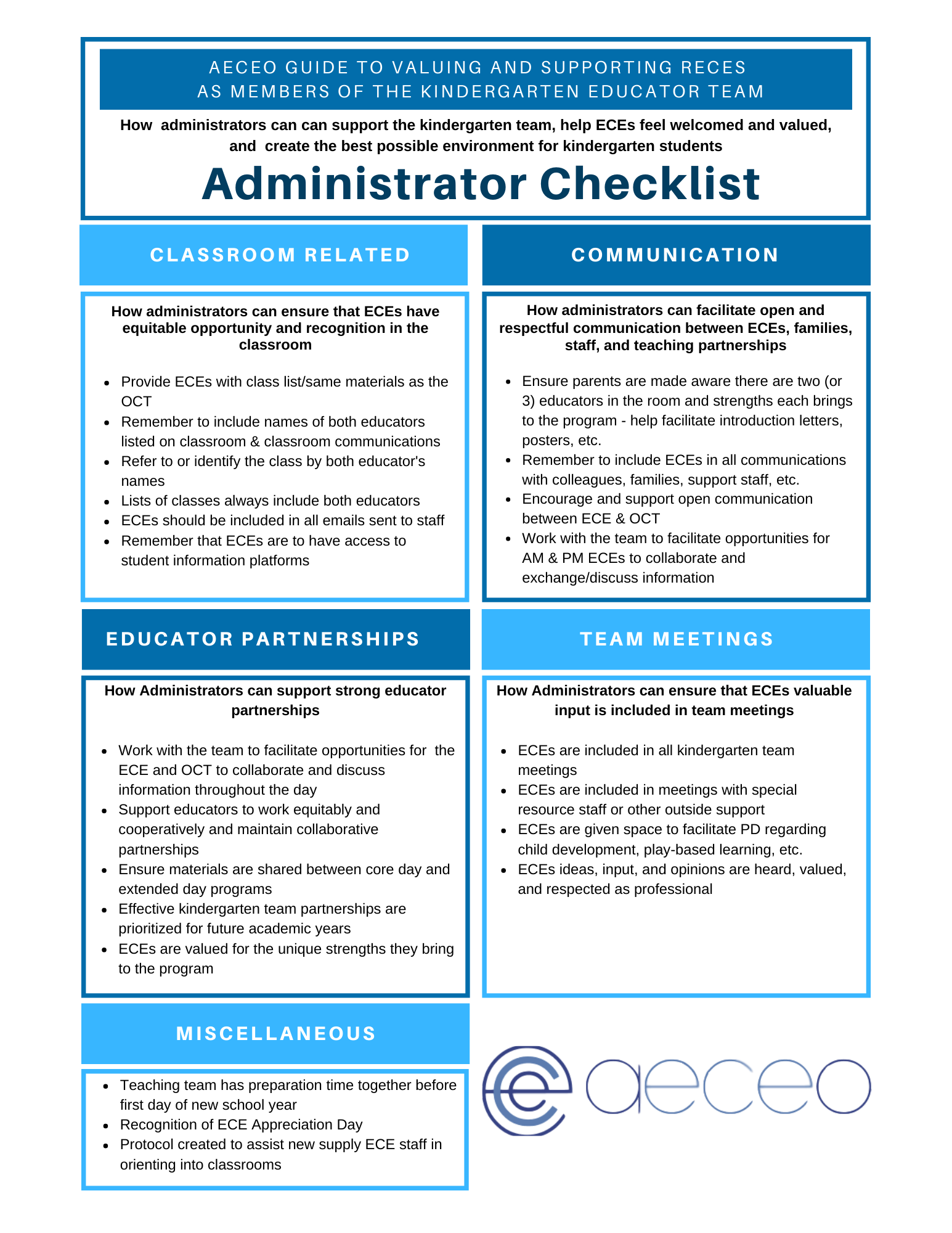 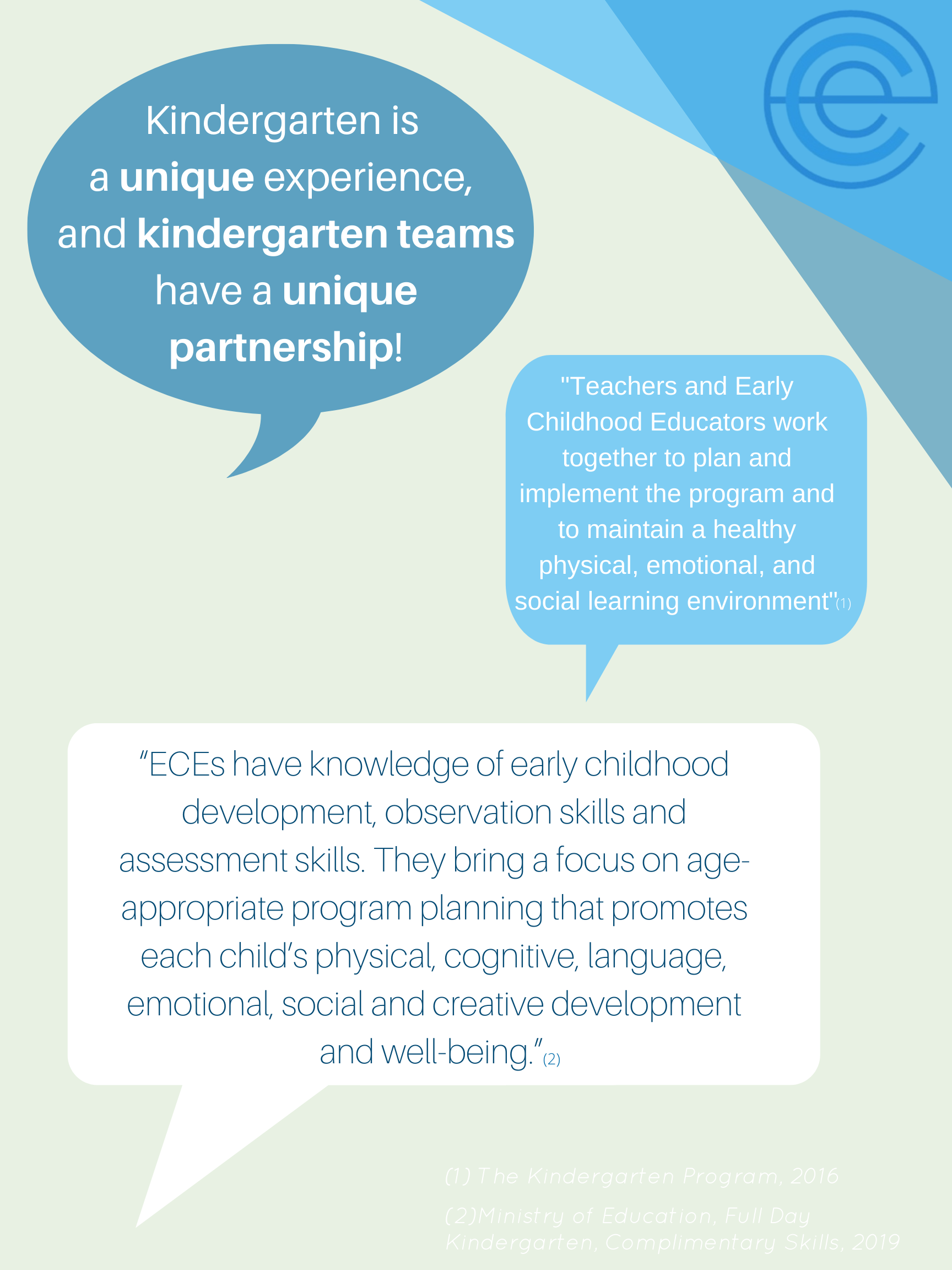 These two examples show how educators may use the information contained in the Role of the Educator document to advocate for themselves to families of children in the program. As well as being a personal introduction to the educator, they fearlessly and clearly articulate the kindergarten team partnership(s) and the role of the ECE. We encourage educators to take them as a starting point in creating your own letters or posters, we know and appreciate the artistic skills of ECEs, and only add that online design tools such as Canva.com and others can be searched directly for "meet the educator" or "meet the teacher" templates. 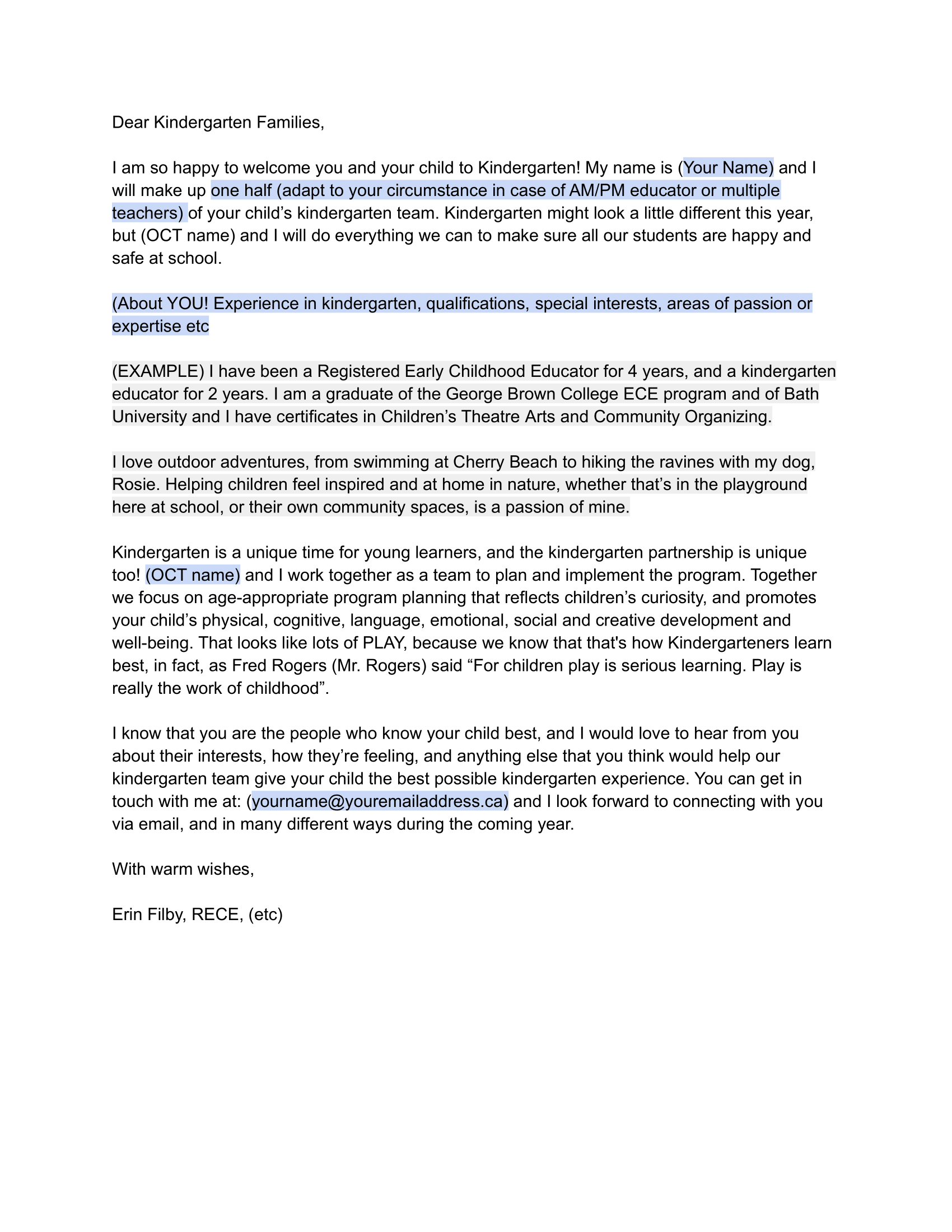 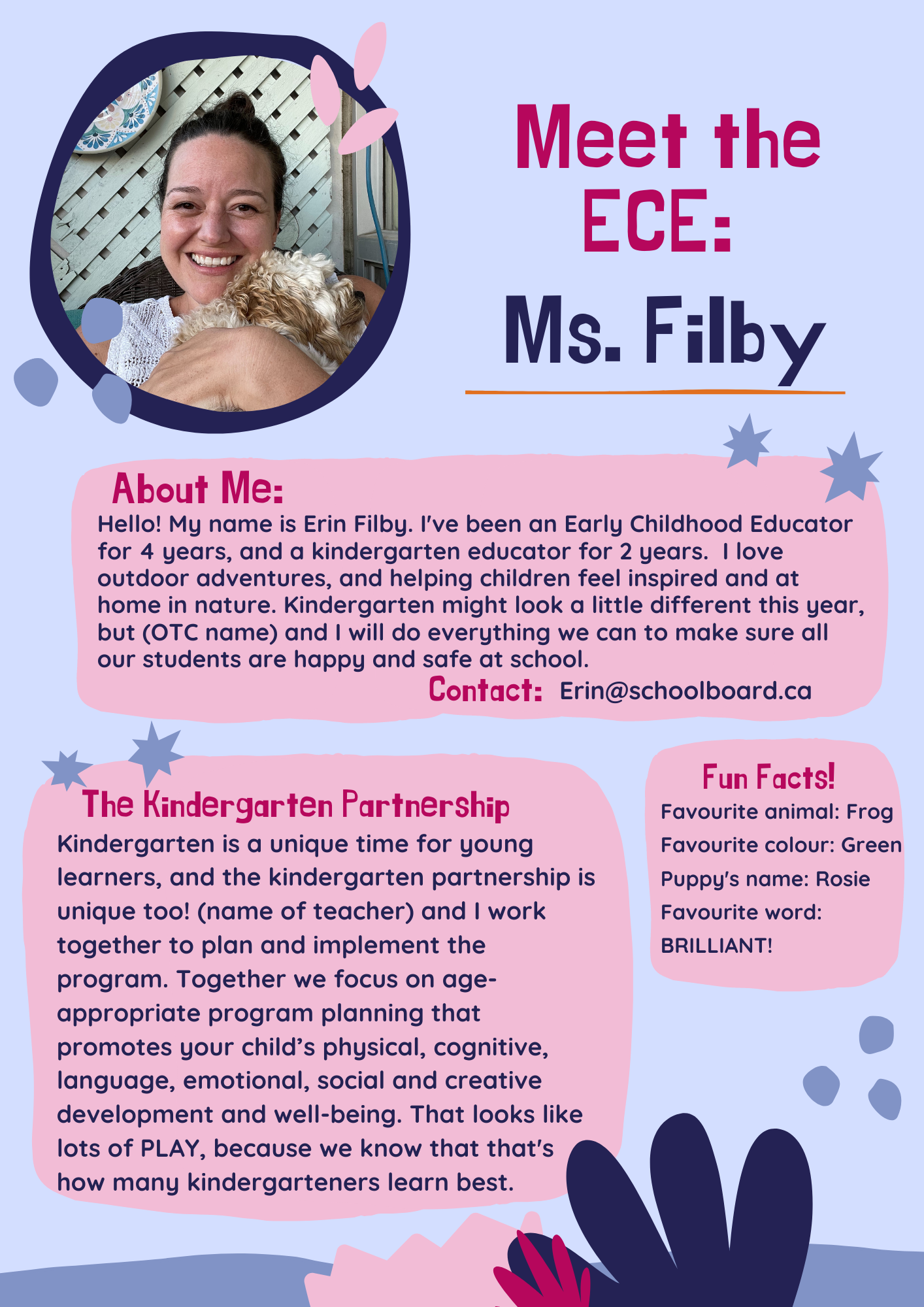 Join us as we collaboratively strategize and plan our next steps. Become a member or sign up for our eblasts to ensure you hear about our next Kindergarten Conversation.