Only two per cent of early years childcare workers are male. Lisa Salmon talks to the Fatherhood Institute about their drive to get more men into the industry

MOST men would love to be “a hero every day”. That’s the way working as a male childcarer has been described by men themselves, but there are still only a handful of males working in the field.

Despite years of progress towards greater gender balance in many professions, the early years education and childcare workforce remains stubbornly dominated by female staff – the latest figures show that only two per cent are male.

Active Healthy Kids Canada developed the first Report Card in 2005 with the goal to power the movement to get kids moving. Over the last 10 years, more than 80,000 individuals and organizations have used the Report Card to advocate for and devise solutions to enhance physical activity opportunities for children and youth.

In 2014, Active Healthy Kids Canada began winding down its operations and the leadership of the Report Card was assumed by ParticipACTION, a long-term strategic partner. Read the press release.

ParticipACTION will continue to work with its strategic research partner, the Healthy Active Living and Obesity Research Group at the Children’s Hospital of Eastern Ontario Research Institute (HALO-CHEO), to deliver the much anticipated comprehensive assessment of child and youth physical activity in Canada.

International Mud Day is children and early childhood professionals – and anyone else – all over the world celebrating nature, outdoors, and mess by getting really muddy. You can participate wherever you happen to be on June 29! Join children and adults across the globe on this day of celebration to grow awareness and honor the goodness of life experienced when children connect with nature.

From Protection to Resilience

Why do educators need to take a balanced approach to risk, and what does it look like?

Across the world, adults are becoming ever more anxious about children’s safety and well-being.  Read more...Paradoxically, these anxieties can end up harming children’s learning and development, fuelling unnecessary fears and undermining trust and confidence in ourselves and our children. How can those of us who work with children take a balanced, thoughtful approach to risk; one that honours and values children’s play, their freedom of movement, and, most importantly, the relationships they have with each other and with adults?  Tim’s talk, based on his influential book No Fear: Growing up in a risk averse society, will help educators and service providers to revisit their thinking; to strike a better balance between protecting children from genuine threats and giving them rich, challenging opportunities to learn and grow.

Child care has long been acknowledged as a necessary component in closing the gender wage gap in two important ways. First, the lack of affordable, high quality child care continues to limit women’s opportunities to participate in on-going, full-time work. Second, child care is still a firmly entrenched ‘female job ghetto’ in which the predominately female workforce continues to be underpaid and undervalued. 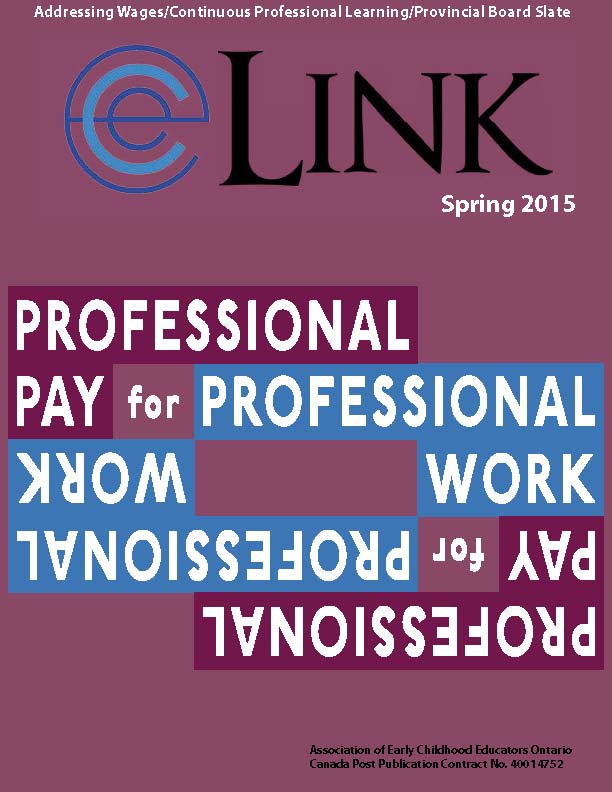